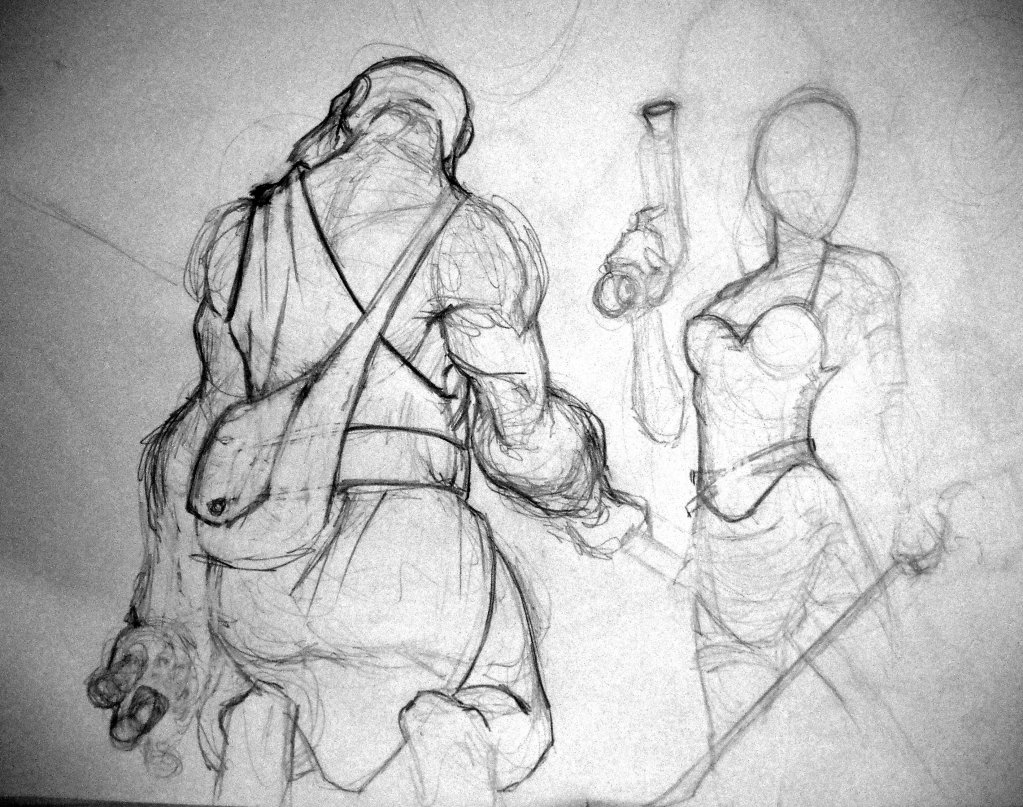 It’s been a long time since I did a good ol’ fashioned character portrait commission. I posted that I was available to the LJ community artcommissions, and the lovely “Leash” took me up on it. This was the result. She sent me a reference for her werebat character, and I managed to get it wrapped up before I headed out on vacation. Overall I’m pretty happy with the work, though I had to keep myself in check. I want to do more of these (relatively) low cost character portraits, but the temptation to spend many hours working on the finer details is tremendous. Leash was great to work for (responsive to my emailed questions and a supah fast payer) and she was happy with the end result, so there is sure to be more of this sort of thing in my near future.

Then I went on a much needed vacation. I knew that I was going to get a lot of down time during my vacation, and I made sure that I didn’t bring any tech with me to browse the web. That left me with my newly modded sketch board, a couple of sketchbooks, and time. Just what I needed to do some old school sketching. I don’t do this nearly enough these days, and the vacation time was perfect. I would get myself an adult beverage, relax a bit, and just kinda let my pencil find its own way. On this occasion, that meant mostly Nevermet Press’ Loaerth & Feywyrd based stuff. It’s just kinda what I was feeling.

First up we’ve got a duo of characters from L&F. A Loaerthian troll and a random warrioress with a gun. You just gotta love girls with guns. I wanted to set up the troll from an odd angle, and I liked where this guy was heading, but my cat-like attention span took over before I got to deep into it, and I just moved onto the next piece. I may come back to this at some point though.

I’m really enjoying the steampunk nature of Loaerth. Designing new gear and costumes and the like is scratching an itch that I didn’t know I had.

Next up, I did a different angle on the same duo. I like this version a little better as the troll seems a little less awkward. Speaking of the big guy, I’m having fun with body types when it comes to the trolls. Making them a little thicker around the waist seems very natural – as if it’s how they want to be and they’re letting me know that on some subconscious level. It also makes them great for composition purposes. Need a big block of space filled? One troll and bang – you’re good to go.

I really should be doing more with some of the other settings being developed for Nevermet Press. Thus it was that I started this fine fellow. “The Sarge” was an idea that started gnawing at the back of my brain and wouldn’t let go. I’m not sure what his whole story will be, but I the basic idea was this: a man who’s fragile in some vital way – anemia, fragile bones (think Samuel Jackson’s character in Unbreakable), or something like that. Difference is that he doesn’t look fragile at all. He spends his whole life living a bluff. Fortunately for him, he’s a brilliant tactician, so he manages to work situations in such a way that it looks like he’s dying to get into the fray and get his hands dirty, all the while, he’s making sure that he can’t do that at all. I don’t know – it’s a work in progress. Yes, I’m aware that his proportions are completely wacked. I can live with that – for now.

Next is a very quick sketch of a cowboy. Nothing too terribly special, and I realize that this doesn’t fit the NMP settings as much (though I think that a ‘wild west’ element might actually work to some degree in Loaerth…) but it’s what I was feeling at the time.

Just a quick sketch to work through his posture and some basic costume elements. This may have to become a more finished image down the road – time permitting.

Lastly, I started creating a poster image. I was thinking of something along the lines that I used to see on the campaign modules from old D&D settings. With the exception of the feytroll’s posture, I like this layout. I didn’t have anything specific in mind when I was doing this, but I like the general feel, flow, and content of the sketch. Here’s to hoping we can find a use for it.

For the individual components: For the human male – I like some of his costume elements, but I need to push them further. For the girl? I’m digging the pop-fiction / almost sci-fi nature to her gun. I started thinking about “what would guns look like in a steampunk world” and this is what took shape. I’ve seen a number of different styles to cosplay steampunk guns, but they’re generally based on real world toy guns. Nerf guns are definitely getting the lerv here, but that didn’t make stylistic sense to me. Rounded chambers and flared barrels? Yes please. The troll – told you earlier that I had Loaerthian trolls on the brain, and that they work great for composition. The feytroll – *grumblebitchmoanIwastiredgrumblebitchmoan*.

Retro Sailor Girl and a 10 Minute Portrait of Jason Lee