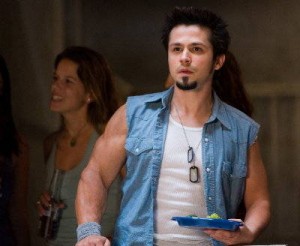 I’m always on the lookout for new art exercises. Just like anything else, we have to practice to get good. Just like folks in the gym, you have to work out a variety of art muscles or you stagnate. Or, in a situation I would consider worse – you wind up the artistic equivalent of Freddy Rodriguez’s character in M. Night Shyamalan’s The Lady in the Water (seen to the left).

I’ve always had great difficulties with portraits. I just can’t seem to get likenesses down. Sure I can draw a demon that looks like it’s about to pry itself from the page, but draw something that actually looks like someone I know? Nope.

It had become something of an issue for me. It’s hard to explain to folks when they say “Hey – you’re an artist! Draw me!” Let’s set aside the fact that they’re asking for something of value for free for a moment and just focus on the awkward place that puts me. People seem to think that I’m trying to squirm out of something when I tell them that I ‘just can’t’. It never satisfies them, and it’s worse if they have seen my artwork before. It just doesn’t make sense that I couldn’t draw something that looks like them.

It’s kinda like when I try to explain to people that just because I support desktop computers that doesn’t mean I know all about SQL databases or advanced programing in Perl, or… oh hell – you get the idea.

And so it is with great pleasure that I stumbled on my latest art exercise: the 3 minute portrait. This seems like just the right way to give myself the excuse to not get it ‘right’. I’m only spending three minutes on each one! How could I possibly get it to look like the person. And yet…

I’ve done three of these on my lunch break. The first three. They… well… they sucked. Hard.

Yeah. I know. You can stop chuckling. If you’d like to see who each of them are, and see the reference photos – click this.

The impressive part (in my mind anyway) is that it didn’t take long to improve. Granted, I’m not about to win any competitions with the second round of portraits, but I feel like there’s a marked improvement already. This is not a bad feeling to have with less than 1/2 hour into the effort.

If you would like to see who these poor SOBs are, check out their reference photos.

Sure, there are a couple of other things involved here. I used slightly different tools and paper for the second round (which is part of the reason the first set look so bad here – camera phone pics). I’ve always been a bit more comfortable illustrating male faces than female faces. (Helps when you have one of your own for reference.) In the end though? I feel like this is something I’m going to keep at for a bit. It’s something that feels like I’m stretching a little.

What About This Doesn’t Work

It’s going to take me a long time to feel like the portraits significantly represent the people I’m drawing – barring those who have really distinct faces. That’s ok though – this is supposed to be a workout. If it was easy, what good would it be doing?

It doesn’t strike me as a very sell-able product. I could perhaps do this for folks at a very low price tag, but I can’t imagine folks are ever going to be looking to pay my rent for something that took 3 minutes to do. If/when that’s the case? I’ll be giving my two weeks notice.

It doesn’t feel complete when it’s done. This is going to be a tough one for me. I’ve been trying hard to finish more work in recent years. Prior to that I had nothing but sketchbook after sketchbook of unfinished stuff. Now, going in the reverse direction feels, in some ways, like I’m taking a big step backwards.

What About This Works

It’s fast and furious. This appeals very strongly to my ADHD nature. By the time a portrait has had any chance of boring me, it’s already done.

It seems to be working. I feel like the second set already show a significant improvement, and I want to see that kind of growth continue.

It’s an area I’ve yet to really do any real work. Like the Freddy Rodriguez character, I had a limp left side artistically speaking. It’s past time to get this workout started.

How I’m Doing It

As a big believer in the KISS principle I’m doing just that:

I’d love to see what you guys do with this. Does it work for you? Does it show you anything about how you create your illustrations that you hadn’t realized before? Let me know in the comments section.

Also – I’d love to hear what everyone’s favorite art exercise it. What do you do when you need to work a little?