(Ed. Note: Just a quick note to say that I originally started this post back in 11/2020, forgot about it, and just came back to finish it / hit ‘publish’)

I just stumbled across a memorial for Gary Gygax (online – I’m not currently roaming). I flipped through the pics on Google Maps, and it got me a little choked up.

While we’re on the topic of D&D, these images are a couple versions of one of my longer running characters. For those who nerd out with me on such things, he’s a half elf sorcerer/thief with the Draconic Bloodline background. There’s a twist though: he doesn’t have an ancestor that’s a dragon – he is a dragon. Oh, and he’s blue from head to toe – including his hair.

But wait, you say – that’s way too much power to give a PC. And, of course, you would be right. So I talked to my DM and came up with a plan to limit him to exactly what other sorcerers have. It was kinda easy to set up.

He started the game with complete amnesia and as a thief. No memory of anything prior to that moment. The backstory works like this: he is a blue dragon (we haven’t determined how old) and an enemy cast some kind of specialized polymorph to force him into this new form and to take his memories.

After two levels in thief, his magical abilities started to ‘show up’ during times of stress. Kinda like mutants in the Marvel Universe. Oh, and he found himself able to speak in Draconic which made no sense at all to him. As he gains levels in sorcerer, his sorcerous skills increase and he recalls more and more of his real self, though at this point (2nd lvl Rogue / 4th lvl Sorcerer) he still thinks his dragon nightmares are just that and not memories.

This works great for roleplaying. Logistically, he’s just like any other rogue/sorcerer with no special perks/penalties aside from what the DM might want to give him for the purposes of Story, but I have something I can always drop back to when game play slows or gets a little repetitive (as all games do).

What’s more, it gives my DM a huge and open canvas on which to hang story plots / npcs / etc ad infinitum without restricting him to just ‘what I want’.

Okay, it’s a bit cheasy. Maybe even a lot cheasy. In fact, the only way it would be any cheasier is if I made him a dragon prince with amnesia.

Don’t care. It works, and it dodges my instinct to make all of my characters wolf themed on some level or another.

I do have to put a lot of faith in my DM because the fact that I’ve left so much open ended and left it to him to mold Dom’s past means that he has a lot of affect on my character. The good news here is that he and I have been friends for many years, and I’ve got plenty of faith in his creative skillz.

Honestly, it’s a lot of fun playing Dom. I’m doing a lot of flavor changes to spell casting elements just to fit the theme a little more readily. Examples? How about:

Thunderclap – instead of a generic ‘thunderous sound’, there’s the sound of a great dragon’s roar, and some folks swear that they could see the ghostly image of a dragon’s screaming head in the air around Dom…

Thunderwave – like with Thunderclap, there’s a ghostly image appearing over Dom, but it’s of a dragon’s foot crashing to the ground as Dom ‘stomps’ in his enemy’s direction.

Lightning Bolt – instead of casting from his hand / a focus, it (perhaps predictably) comes from his mouth.

So in general, I just can’t wait for the next… 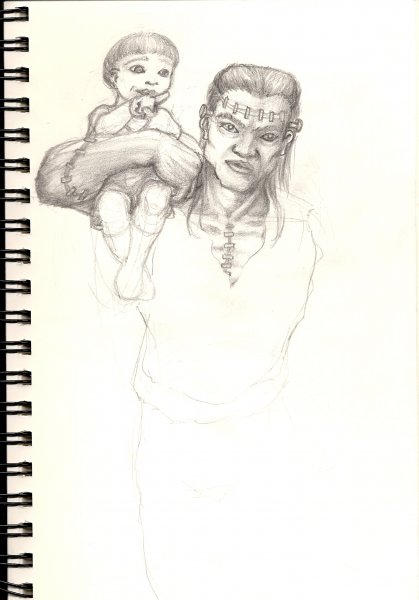 What Exactly Do I Put in My Patreon Posts?