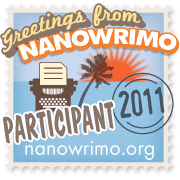 I’ve decided to participate in NanoWriMo again this year. It’s been a long time, and it’s probably well overdue. I enjoy writing in general, but I seem to have a bad habit of letting Life get in the way. As many of you who know me personally are aware, I often struggle to just keep up with all the art projects I want to do, and writing is at least one notch down the ladder from illustration, so yeah…

I’m bending the rules a bit. The idea with Nano is to write a 50,000 word novel in one month’s time. I’m looking to do the same volume of writing, but in a different format – namely blog posts. I’ll be writing blog posts for Dragonbones.net and scheduling them to go out (at most) once per week. I figured that my poor site has been neglected over the years, and it’s time to fix that. I’m using Nano as the incentive to push through and create the posts that I keep meaning to write, but never get round to. I know that I’ve got plenty to share with folks, and it’s time for me to stop finding excuses not to.

I’m going to be creating posts for Dragonbones and refining those posts later to develop a book. Each post will center on one topic which I hope to cover in sufficient detail so I will have a strong foundation when I start to build out the book. I’ll eventually take what feedback I get from folks (via comments on this site and others) and rewrite (or flesh out) the posts, compile / edit / etc each of them and voila – the greatest art/illustration book ever written.

Ok, maybe not, but I’d like to think that it will at be well worthwhile.

Each of the posts will hover somewhere in the 500 – 1000 word limit. I think that anything less will feel like I haven’t covered the topic du jour well enough, and anything more will feel like I let myself run on.

I’ll cover things like art exercises, tricks of the trade, marketing for artists, and any other elements I can come up with or folks say that they would like to read.

That’s right – I said that I will take feedback – both on individual topics that I write about and on topics that folks would like to know more about. That’s where you come in.

I’d loooove to get your thoughts on things. While I will only be releasing roughly 1 post per week on the site, I’ll be talking about new posts I want to do here and on my blog. I could really use your help via that feedback. Go ahead and let me know what you think – about any element of this project.

Think I’m rambling too much? Let me know.

Think I need a more diverse set of topics? Tell me.

Think I should never again put pen to paper? Well… you can tell me that, but I’m probably not likely to take your advice. If you’ve got some valid critiques though – I promise I’ll consider them. I’ll probably even reply.

Which brings up another point – I’m planning on being as interactive as I can be during this little fiesta. I can’t promise I’ll reply to everyone all the time, but I’ll get as close to that as my time will allow.

Well, it’s time to get started. Thanks for checking this out, and I look forward to your input!