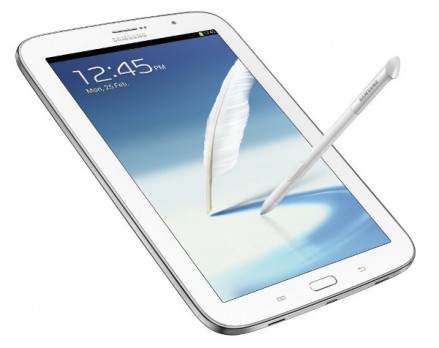 My Note 10.1 broke. I’m not sure how or when – it seemed to happen quite literally overnight one night – but it’s as if the layer in the tablet which interacts with the stylus has been disconnected. It no longer recognizes the stylus at all. The capacitive elements still work normally, so it’s a great Android 10″ tablet, but I can’t (really) use it for a digital sketchbook.

Add to this my concept of “if you’re going to go portable – go extremely portable” and I found myself picking up the Note 8. I wanted something to replace the ‘sketchbook’ that had been my 10.1, and didn’t require the pull it out/set it up of the Cintiq. This fits perfectly. What’s more, it works great with the special stylus that I mentioned before. This is important to me because I love the traditional media feel of flipping the stylus around to erase rather than switching tools manually in the app.

For the Day Job, I keep it in the front of the van with me – playing audio books and podcasts through a bluetooth adapter for the stereo. When I stop to eat, I can pick it up, throw it in a pocket, and check my mail and facebook while dining. Stop to stretch my legs? It’s instantly on and ready for me to sketch something while I walk around the park.

It suffers (like its big brother) from a lack of apps that really do the heavy lifting, but again – that’s not what I bought the Note 8 for. (Edited to Add: For those who are interested, I use AutoDesk Sketchbook Pro pretty much exclusively for sketching/painting with my Note 8.)

Like the LS800, the Note 8 seems like it’s the perfect combination of inexpensive, convenient, and functional enough for a digital sketchbook. It also has the added advantage of being better at a lot of other things (which the LS800 really wasn’t).